There’s something special about train journeys. We’re not declaring it above other travel commutes; they, too, have their positive elements. But, train rides somehow draw you closer to the things around you; it’s an experience altogether. Picture this, you’re with a group of friends traveling to a new city. You know the journey is going to be a long one, so you bring along a pack of cards, and maybe a guitar to have sing-song sessions. That, against the backdrop of the train route aesthetics around you, is the perfect recipe for an unforgettable journey.

The beauty of train journeys is that they can be enjoyed by solo travelers too. They have those few hours to themselves, and getting some alone time in this modern world is a luxury.  Whether you prefer solo travel or group, here are some of the best train travel routes in India you should check out. Mumbai and Goa, are two destinations known for entirely two different lifestyles. One is known for its fast-paced nature and the other known for its laid-back, or susegad, way of life. No points for guessing which destination is known for what! The Mandovi Express takes the Konkan railway route, which is known for its beautiful, lush, landscapes. The route is embedded deep within the Western Ghats on the Sahyadri Hills, overlooking the Arabian Sea.

A 580-km stretch filled with 92 tunnels and 2,000 bridges, you can say your journey is going to be a picturesque one. Gliding through paddy fields, coconut trees shading quaint villages, and gushing waterfalls, the experience will be as if you’re placed directly in a documentary about nature!

Also Read: 7 Luxury Trains In India That You Must Travel In

The southernmost part of India is blessed with lush greenery and ample salinity from the west coast. The Island Express starts from the place where three seas meet, Kanyakumari, and it’s one of the best destinations for a train journey to begin. It takes just a mere two hours to reach Trivandrum, but the amount of sensory overload you’ll get within that short span is immense. If you're up for a fun adventure, this is one of the best train travel routes in India.

You can view the best of Tamilian and Keralite architecture through the train’s tiny windows. Along with that, you’ll see a bit of local life and how it’s so different from urban living. You’ll see a group of men getting together to enjoy an afternoon drink under the palm tree, locals selling fresh produce from their carts, etc. Just a recommendation: This experience is better enjoyed via open windows, so try booking a general class seat instead.

The Chennai - Rameswaram route can be considered unique because of the narrow bridge that connects the two cities. The height of the bridge is just above sea level; you feel more like sailing than traveling on some terrain.

The bridge has some mythical connections as well. It’s said that Lord Rama built this bridge to rescue Sita, so whenever you take this route, remember that you’re passing through a certain timeline.

Also Read: 5 Of The Best Budget Hotels In Chennai 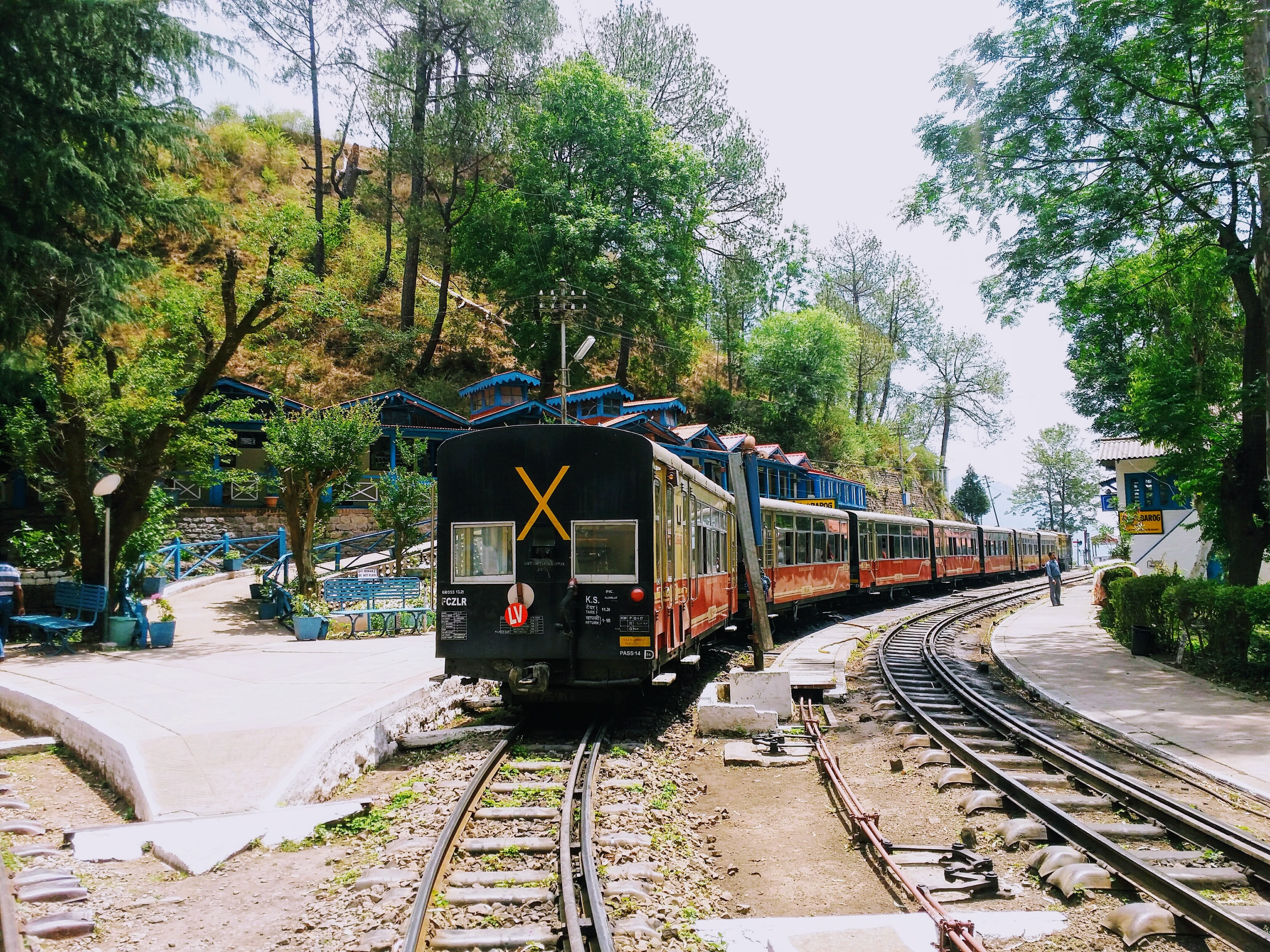 We’re pretty sure that you must’ve seen trains traversing through the foothills of mountains in movies. But if you want to live out that experience, then you need to take the Jammu - Udhampur route. It’s life-changing and you’ll appreciate the gems India possesses in its land.

This scenic route is around 53 km long from Jammu to Udhampur, which then traverses through the foothills of the Himalayas. That’s not the only star element of this route. The great Shivalik mountain range surrounds you, along with deep valleys consisting of expansive rivers and lakes. It’ll surely make you feel adventurous, and that’s why it’s one of the best train travel routes in India.

On this journey, you’ll be traversing around 20 tunnels and 158 bridges. It’s guaranteed you’re going to catch some majestic views, especially from the Gambhir bridge.

Another route that’s full of adventure and among the best train travel routes in India is the Kalka-Shimla route was built in 1903 during the British regime. Consisting of around 102 tunnels, 87 bridges, and 900 bends, this route can be considered an adventurer's paradise. As you approach Shimla, you’ll find the place littered with orchards and tiny streams of water cascading from rocks. Post monsoon, these tiny streams develop into waterfalls and the chaotic sound of it makes it like a sort of nature ASMR (Autonomous sensory meridian response).

The train does have a couple of stops here and there en route. So you can easily jump off onto a station and enjoy a nice hot plate of samosas with a warm cup of chai.

If you had to travel from Pune to Delhi, you’d take approximately 26 hours by any other train. But, with the Nizamuddin Duronto Express, that long journey is cut down by 6 hours. It travels through varied terrain spanning villages, deserts, mountains, rivers, and salt pans.

The train also offers meals, included in the ticket. Plus, the best part is that every berth is clean and has bottle holders and plug points. All these small amenities make the journey less strenuous and it enables you to concentrate on more important things like enjoying the scenery or reading a novel.

Also read: 11 Hill Stations Near Delhi For An Awesome Holiday Looking for a novel way of traveling to one of India’s most prominent hill stations? Then try the Nilgiri Mountain Railway as it is one of the best train travel routes in India. The route itself has 6 tunnels, 250 bridges, and 208 curves, covering an expanse of misty hills, dense thickets, and lush green lands. You know what a hill station looks like, right? Here’s a fun fact for you: the Nilgiri Mountain Railway route is considered to be Asia’s steepest track, with the elevation starting at 326 m and then rising to 2,203 m.

Since you’ll be traveling on such heights, there’s a certain chance of catching panoramic views. And although it takes 5 hours to reach the place, the journey can feel like a vacation itself.

Which Is The Slowest Train In India?

The Mettupalayam Ooty Nilgiri Passenger train runs at a speed of 10 kmph and covers the 46 km stretch in 5 hours. Compared to the fastest train in India, it’s 16 times slower! The hilly terrain makes the route a longer commute, so nothing much can be done to quicken the pace of the train.

Which Is The Longest Railway Route In India?

The route from Dibrugarh to Kanyakumari is the longest railway route in India, covered by one of the Vivek Express trains. Compared to the world, it’s the 24th longest.

Which Is The Longest Non-Stop Train In India?

The Trivandrum-Nizamuddin Rajdhani Express is regarded as India’s longest non-stop train. It covers a distance of 528 km between Vadodara and Kota in approximately 6 hours.

What Is The Best Train Trip In India?

India is blessed by several train routes that are astonishingly beautiful. You'll be spoiled for choice with some of our top recommendations:

What Is Special In Duronto Express?

Duronto Express is a subsection on the type of long-distance trains that commute under the guidelines of the Indian Railways. What’s so special about these types of trains is that they commute nonstop from point A to point B without any halts. They even have a distinct look to their trains. You’ll notice their passenger coaches decked in yellow-green and orange textures, symbolizing the colorful routes it takes.

Is A Train Available In Matheran?

The Matheran Hill Railway was closed until the 1980s due to the increased frequency of landslides, and it was closed mainly during the monsoons. Now their lines are open all year round. So, you don’t have to worry about a sudden closure happening unless there’s a major technical mishap, and can enjoy this stunning beauty of Matheran.

Does Mandovi Express Have A Pantry Car?

The Mandovi Express does have a pantry car, serving snacks, breakfast, and lunch, along with beverages like coffee, tea, etc.

Which Is The Longest Non Stop Train?

The Trivandrum-Nizamuddin Rajdhani Express is the longest 'non-stop train' in India. Which covers a distance of 528-km distance between Vadodara and Kota. 8 Best Road Trips In India That You Must Go On